We wanted to share the exciting news that Duff has been placed with a wounded Army Ranger veteran!

Sean, a 46-year-old Army veteran, was disabled during his tour of duty and has been wheelchair bound since 1996. He is supported by a large and loving family and has raised a son. When he recently started looking for a service dog, his niece came across Duff and they contacted us.

After reviewing Sean’s application and letters of support and conducting interviews on Zoom, we decided to arrange a meet & greet. In September, Sean and his mother traveled from Las Vegas to meet Duff and work with Anna and Janette for Partnership Training. The plan, over a few days, was to focus on transitioning and bonding.  If all went well, Duff and Sean would become a team and begin their new life together. 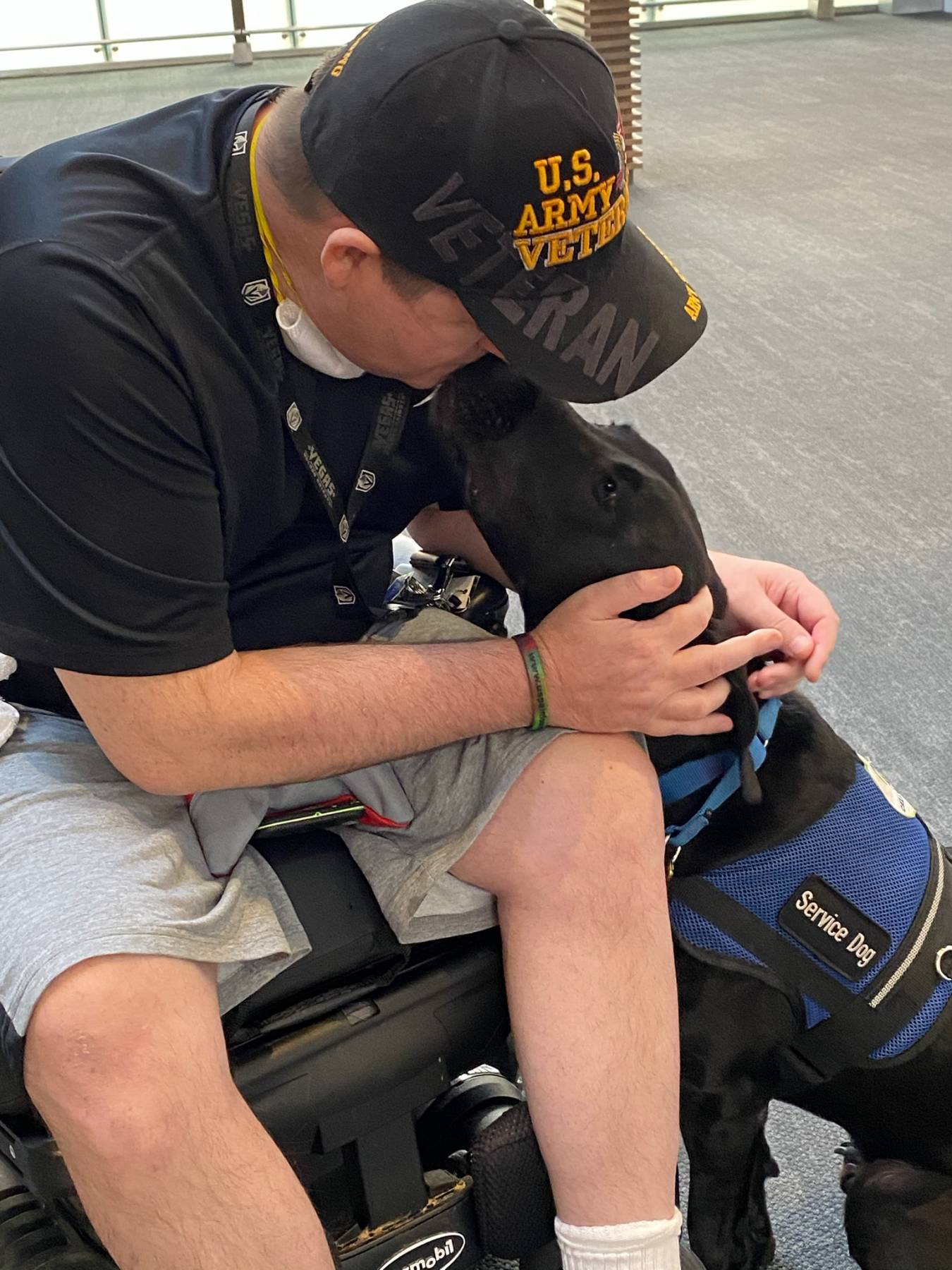 Training a service dog takes years and the cost is often $20,000+. Thanks to a generous donation from The William A. Schampeau Charitable Trust, we received funding. Once we found Duff, everything was on path for this amazing moment: his placement.

Duff had been with Anna, our dedicated service dog trainer, for more than a year. Thanks to her loving care and guidance, he transformed remarkably from adolescent Lab mix to confident and loving service dog. When it was time to find his working partner, we actively searched for a few months. Finding the right fit takes time and precision. Having worked with Duff for so long, we had fallen in love with him and knew that the upcoming transition would be bittersweet. But we also knew the ultimate goal was to help Duff become his best self and work as a service dog. 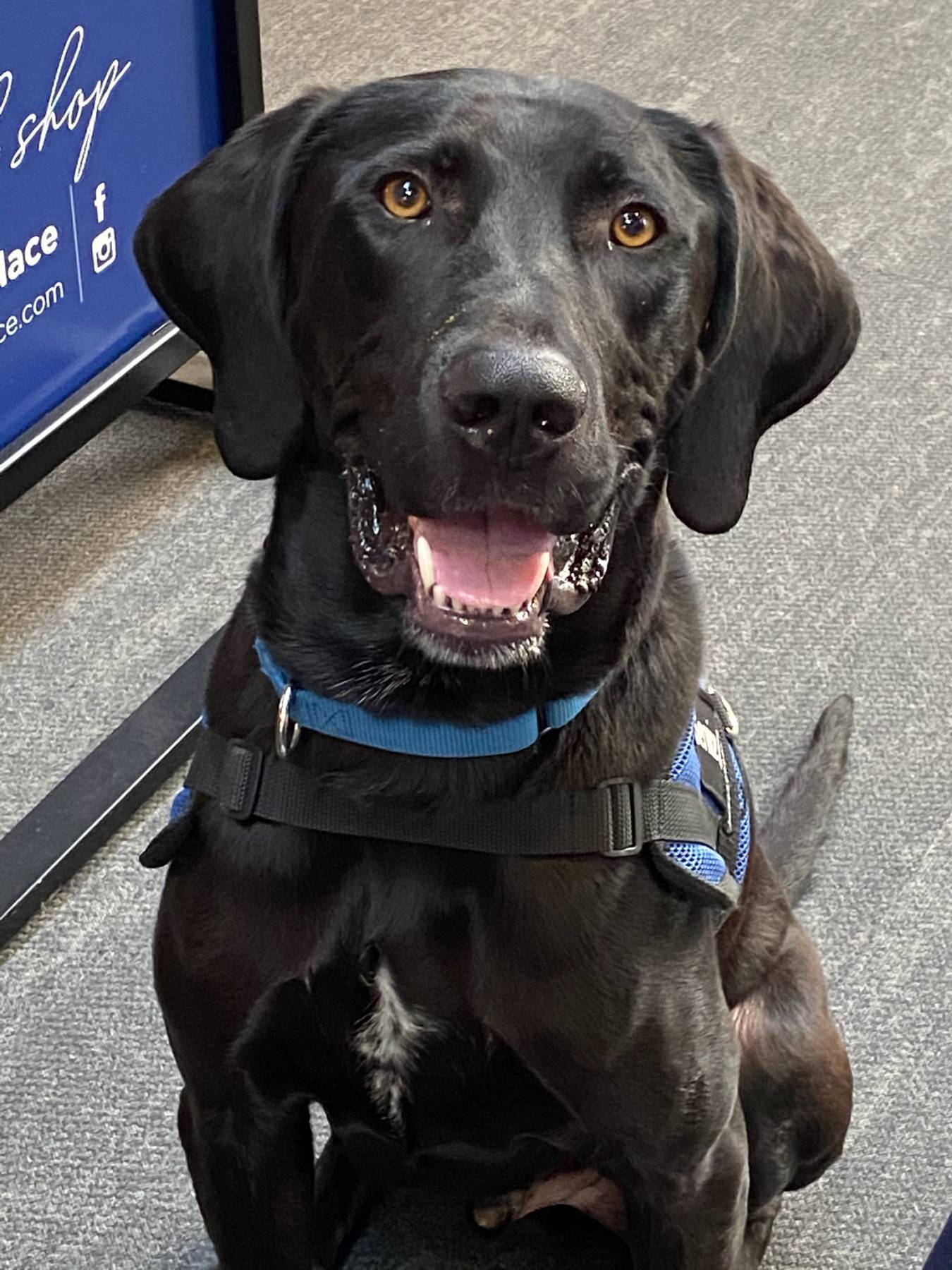 Placement is always an exhausting and grueling process for all involved, but Sean’s positive “can do” attitude coupled with the loving support of his large family made him the perfect client to work with Duff.  As he transitioned to his new working life with Sean, Duff was a super star.

Training Day 1 – Upon meeting for the first time, Sean and Duff really took to each other! Shortly afterwards, they and the Cell Dogs team headed to the mall, a busy spot that’s a good test for partners starting to work together. There’s a lot to learn: getting in and out of elevators and stores in a wheelchair with a dog tethered to the chair’s side, safely opening heavy doors, maneuvering together through tighter spaces, waiting in checkout lines, and issuing timely cues/praise for Duff to retrieve dropped items. After a long day of hard work, Sean headed back to his hotel. Duff would spend 2 more nights with Anna.

Training Day 2 – Duff and Sean, feeling more comfortable with each other, rocked their second day!  The new team perfected their skills maneuvering safely in public and Duff learned the loading/unloading process for Sean’s adaptive van. It was wonderful to see Sean’s confidence grow as Duff became more responsive to his voice and command requests (Duff is very food motivated so Sean was well stocked with yummy soft treats to help maintain Duff’s attention amidst LOTS of distractions). Sean learned how to encourage Duff to retrieve dropped objects: keys, cellphone, pencils, loose change, etc. Duff absolutely loves this game and was eagerly happy to respond to Sean’s requests for assistance.  It was awesome watching Sean and Duff really put their hearts into the day’s task work.

Training Day 3 – These transition sessions are not easy, either on the working pair or on the trainers.  Full attention and dedication are required and going through this process in unfamiliar locations adds challenges. There’s a lot to learn about handling, without prior experience, a service dog plus all the myriad new things to learn about each other – Sean compared it to boot camp! Despite any difficulties, these two rocked day 3. At the conclusion of the training session, Duff went back to the hotel with Sean to spend their first night together. This step is always a bit stressful for client and dog since it’s a new situation for both of them. But Sean’s positive attitude helped Duff settle in nicely and he slept like a rock on Sean’s bed. Meanwhile, Sean had to become accustomed to having a 90 pound companion lying next to him (thankfully, Duff didn’t snore)!

Training Day 4 (final session before going home) – We spent quite a bit of time answering questions and troubleshooting minor areas of concern before embarking on a final public outing.  Sean and Duff seamlessly navigated through a busy parking lot and Target store. Duff was very comfortable tethered to Sean’s wheelchair, closely sitting or lying down with ease whenever Sean came to a stop – poetry in motion! It was the end of the day, the end of partnership training and everyone was pretty tired. But we were so very proud of everything that Sean and Duff accomplished during the week. After a final photo session, Sean and Duff said goodbye to our trainers. Though there were tears in their eyes, their hearts were full knowing that Sean and Duff would be amazing working partners and companions. 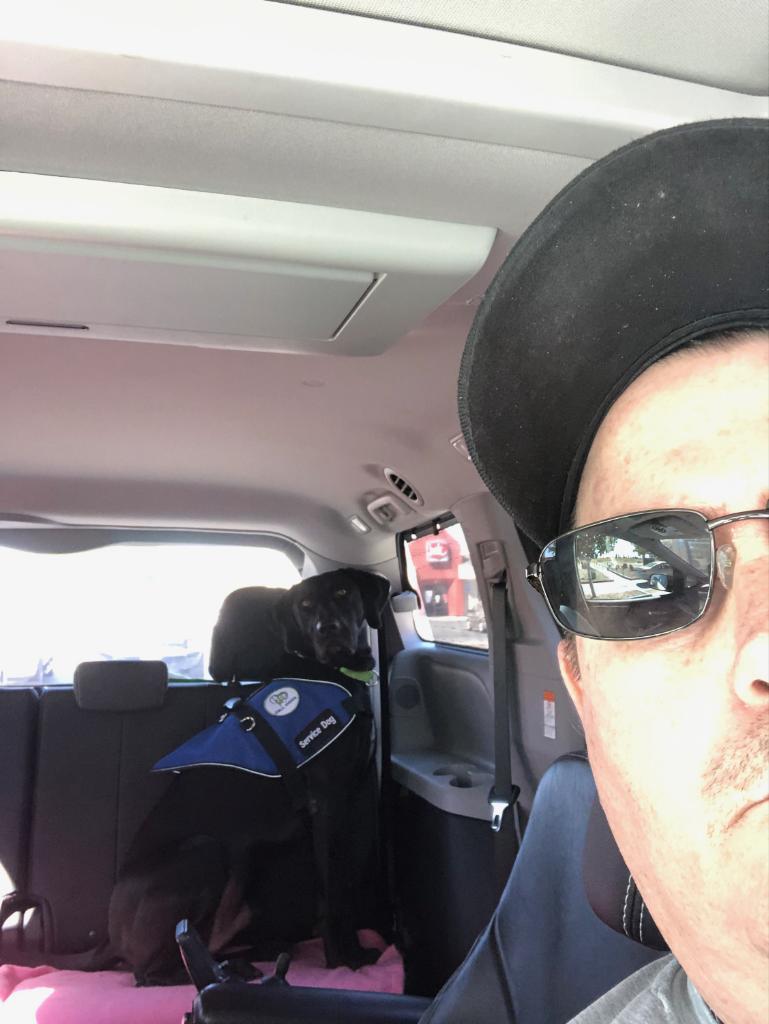 UPDATE: After going home and settling into routines Sean and Duff continued to work and grow together. Sean and Duff to got ready and passed the PAT (Public Access Test). Our team visited Sean’s home to make sure both are doing well.

Watch this heartwarming video about their ‘love’ story.


Mary Estelle Cosgrove Nash & The William A. Schampeau Charitable Trust, thank you for making this a reality!