During our training courses, some dogs prove to be quick studies in basic obedience. Expressing an eagerness to learn and do more, these canines are then given advanced training to become service dogs.

The Americans with Disabilities Act states “Service animals are defined as dogs that are individually trained to do work or perform tasks for an individual with disabilities. The task(s) performed by the dog must be directly related to the person’s disability.”

From abandoned pet to well-trained pup

We first met Ruby in August 2017 when she landed at the local animal shelter. Because she had a microchip, she had to remain at the shelter for 10 days prior to being available for adoption. Can you believe Ruby’s owners never came to pick her up? To secure her for the program, we waited from 5 p.m. until 10 a.m. the following day, to be the first in line to secure her adoption – purebred labs are a rare find. Ruby was of course well worth the wait as she has blossomed into an amazing service dog for a veteran struggling with PTSD.

Though she was beautiful, she was also something of a wild-child.  Whoever had her before, it was obvious they didn’t teach her any manners or basic obedience.  She had a ton of unbridled puppy energy and had been given no structure to express it appropriately.  What we noticed right away was her desire to be with people and a willingness to please.  We saw that she was smart and we wondered if she might have what it takes to be a great service dog.  Aside from those musings, we already knew that Ruby’s lack of previous training and terrific amiability with other creatures (both humans and other dogs!) made her a great candidate for basic training.

The program trainers immediately fell in love with Ruby and embarked on the 8-week training session.  Lead trainers Kimmie and Mayra spent every day teaching her basic commands.  When we came in each week to gauge everyone’s progress and offer further instruction, we often had our mouths open in happy surprise: we knew Ruby was smart, but we had no idea just how swiftly she would learn all the basics.  It was early on in the 8-week training cycle when we decided to advance her to service dog training after her graduation.  Over the course of 8 weeks, both her trainers did fantastic work transforming Ruby from “Dogzilla” into a well-trained pup. 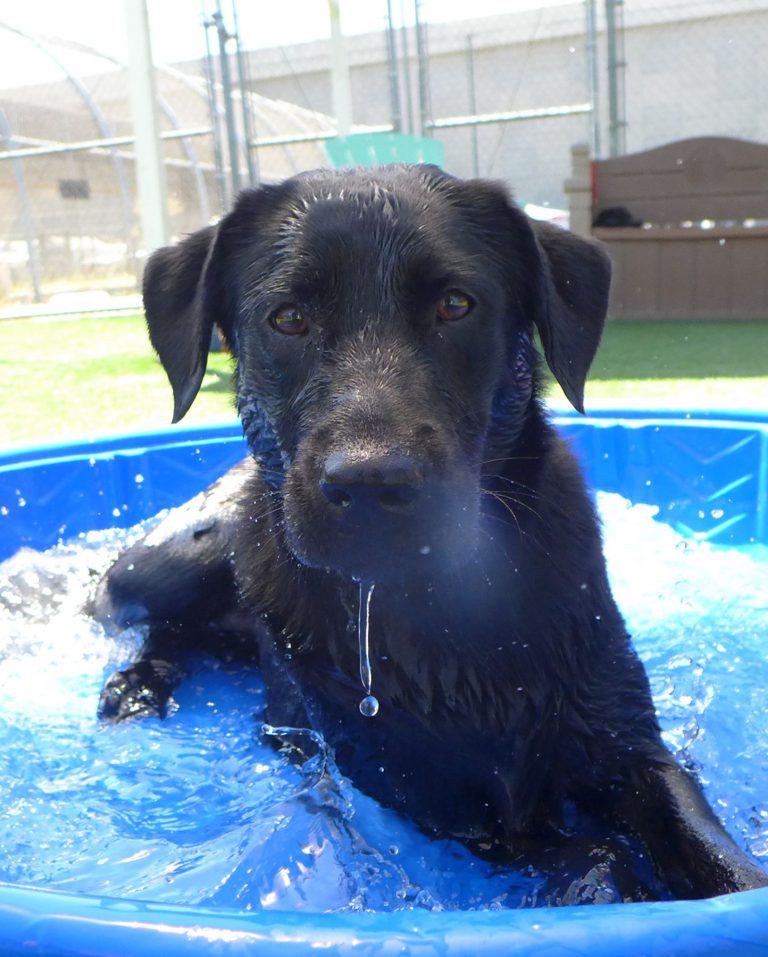 When Ruby graduated last November, we passed the leash off to our service dog trainer, Anna.  Something our facility programs cannot offer is exposure to all different kinds of environments.  This is a crucial part of advanced training because certified service dogs accompany their partners absolutely everywhere: grocery stores, airports and airplanes, doctors offices, restaurants.  A properly trained service dog is well-behaved in any scenario regardless of sights, smells, and any kind of traffic movement (people, children, other dogs, inanimate objects, etc.).

So Anna began the 8-months-long process of thoroughly socializing Ruby and acclimating her to myriad stimuli in different environments.  Together, they worked on strengthening Ruby’s mastery of basic commands in public places offering lots of distractions.  On top of that, Anna began teaching Ruby advanced tasks like Tug, Nudge, and Retrieval with various items as well as responding to emotional difficulties for individuals with autism spectrum disorder. Service Dogs also learn that once the jacket is on they are in working mode.

In spring of 2018, someone reached out to us about needing a service dog.  Gabriel, a former marine struggling with PTSD from tours of duty in Afghanistan, was looking for a service canine that could help with his PTSD symptoms. The initial meet and greets with Gabriel and his family went very well. Gabriel and his family were very excited about the possibility of getting a service dog, and unafraid of the commitment and work it would take to achieve their goal.

Once we identify the potential client for the dog, we customize the training to their needs. As Anna continued working to polish Ruby’s know-how, she staged night terrors during sleep as part of Ruby’s schooling.  Within no time, Ruby would leave her own bed to go over to Anna’s bedside and nuzzle her awake if Anna thrashed or vocalized long after the lights were out.

Once the dog is trained, but prior to placement in a new home, we work together with the client and dog to strengthen their ability to become a great working team. Although service dogs improve the quality of life for the person, the transition is not easy. To help ease Ruby’s transition from her trainer to become Gabriel’s working partner, the new pair participated in a series of public outing training sessions from June until the end of August. These sessions provided Gabriel an opportunity to learn to work more confidently with Ruby, while Anna stood in the background ready to lend a hand if needed.

Initially, it was very tiring and overwhelming for both Gabriel and Ruby as she was used to working with an experienced handler. Although Gabriel was on a steep learning curve, it was obvious that Ruby was a great working partner for him! After working together for nearly 3 months, both Ruby and Gabriel were ready for the next step: bringing Ruby to Gabriel’s home for bonding and the final phase of training.

When Anna dropped Ruby off at Gabriel’s home on August 31st, somehow Ruby knew she had arrived at her final destination. She was very excited to see Gabriel and his family and thrilled with all the new toys they had waiting for her. When Anna was ready to leave, Ruby came over to give her a gentle nuzzle then sat beside Gabriel as if to say, “I’ve got this! You were a great teacher, now it’s my turn to go to work.”

After a great bonding weekend, the work continued with multiple training sessions each week. Our trainer helped optimize some in-home scenarios to streamline Ruby’s adjustment to her new home, and practiced with Ruby and Gabriel in countless locations to evaluate and ensure their comfort level and appropriateness. Despite the initial jitters of working in more distracting environments, the pair continued to exceed our expectations with their swift progress. 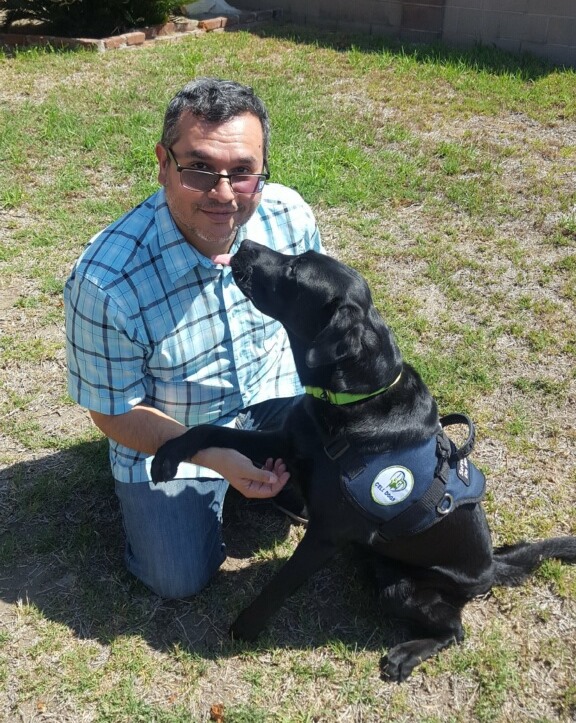 By the middle of October it was obvious they were bonded and ready for their Public Access Test, allowing us to certify them for a year as a working pair. Gabriel knew he and Ruby had worked really hard to make great strides and was confident they would pass, but confessed to having “butterflies” before the evaluation began. As we watched how Gabriel and Ruby easily handled all the required exercises in a busy mall, we also saw other shoppers stop in amazement as this new service dog team confidently navigated all types of distractions along the way.

On Thursday, October 25th Gabriel and Ruby passed their Public Access Test with flying colors! We are so proud of their accomplishment and we’re extremely proud of the important role our team played in making Gabriel’s dream a reality. 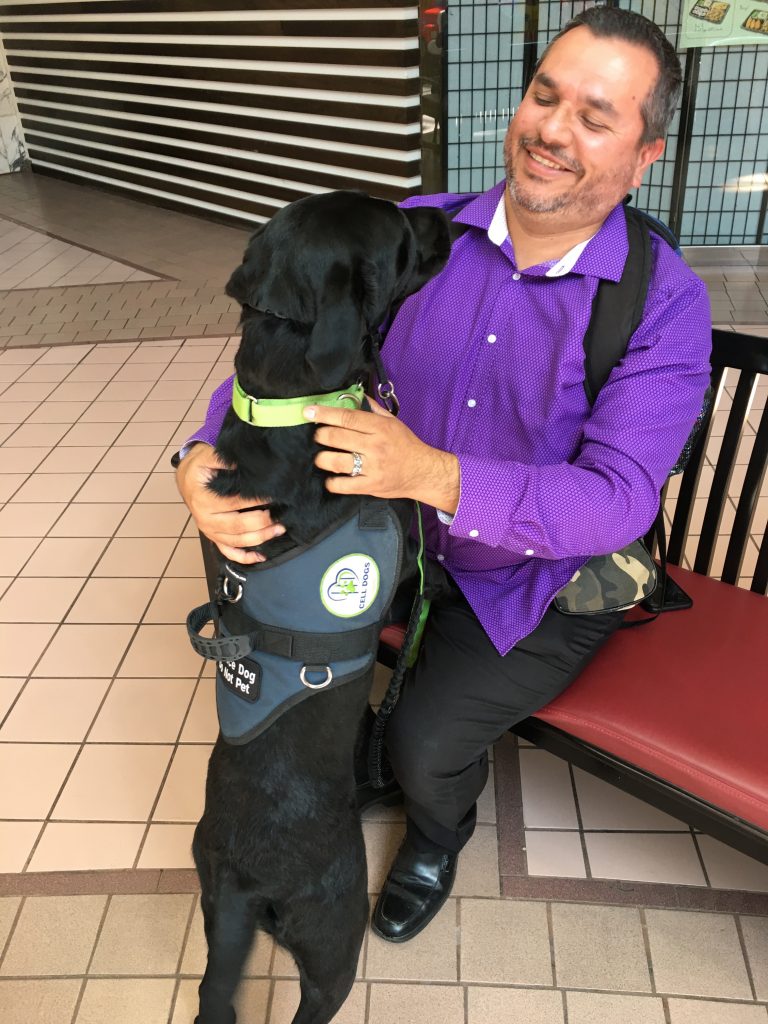 Cell Dogs regularly checks in with working pairs and re-certifies every year to ensure both dog and handler are well and working well together.